We've finally warmed right up to more average temperatures, and I've been outside most of everyday planting the greenhouse and basement grown seedlings. We even planted two plots at the community garden and have plans to plant more in an unused space in a friend's yard. So many tomato plants!! And peppers. Trying a few new things, including our first sweet corn (husband is totally in charge), quinoa, and kidney beans. Also lots of kale, and our first attempt at cabbage specially to make saurkraut.  Getting excited! Meanwhile the tulips are just finishing, as well as the crabapples... and almost all of the dahlias are planted. Enjoy a few instagram shots from the last two weeks!
The first peony to bloom is always the unique Paeonia tenuifolia- or atleast I think that's what it is. We inherited this plant when we took over this garden. I find this peony's frn like foliage to be much larger than the fern leaved peony I'm used to, with the blood red flowers and super fine foliage. This one is more pinkish red, and the ferny foliage is much thicker. It was planted in mostly shade when we moved in, and I've since moved one of them into a more sunny spot. They both bloom long before the other peonies, along with the tulips and crab apples. 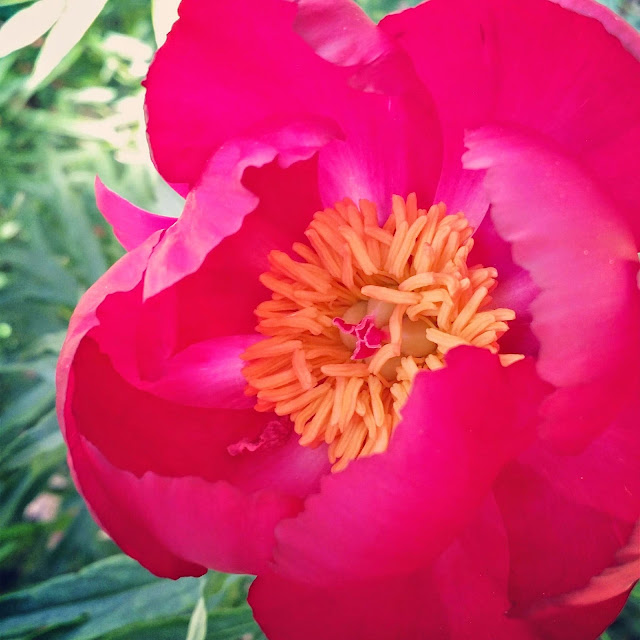 Tulip "gavota" has the most unique colors, and looks stunning opened wide for the sun. 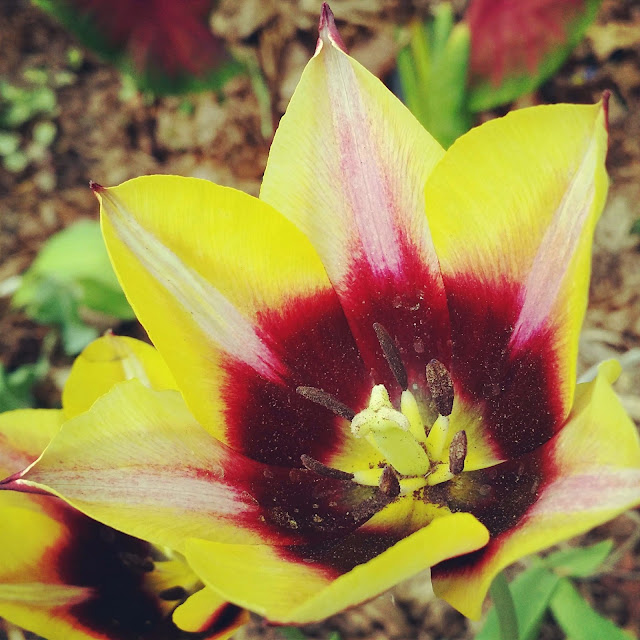 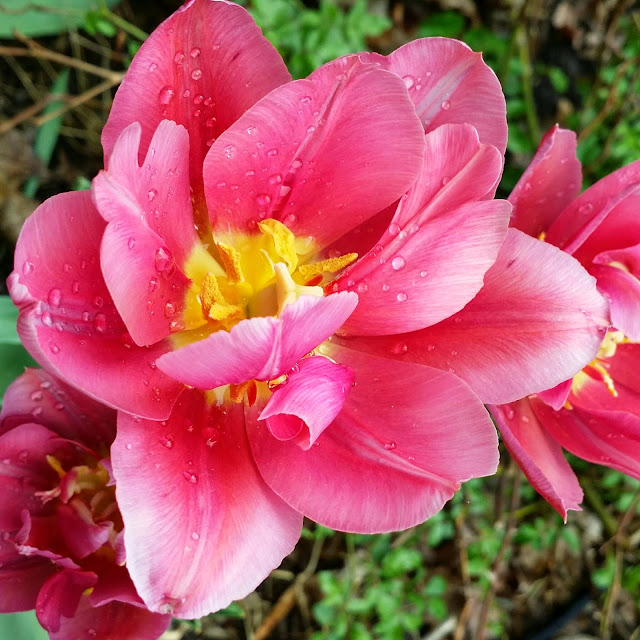 Love how the dwarf iris all spring into action when the tulips bloom, also. 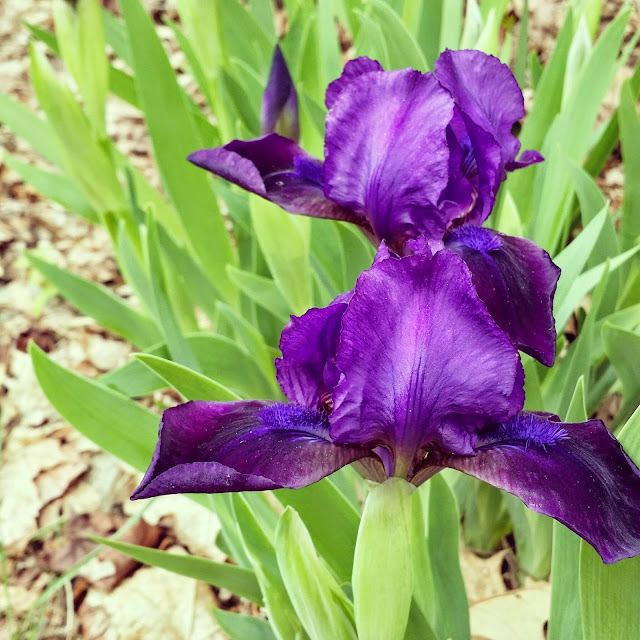 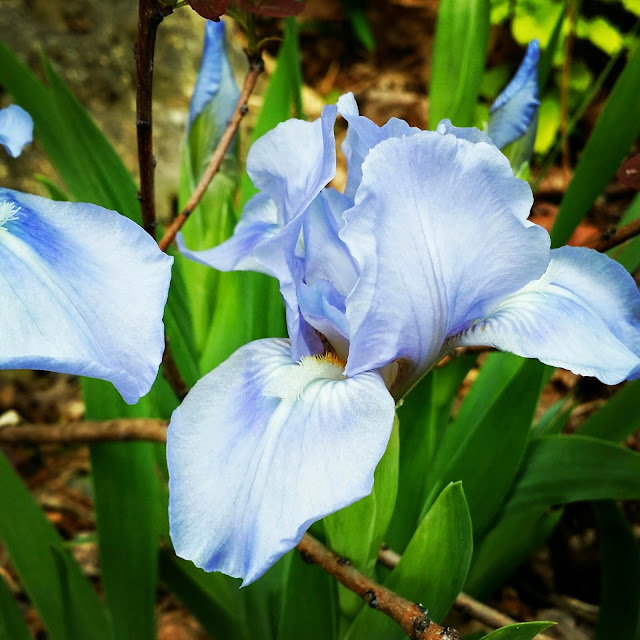 Not many lilacs this year- not sure why. But I'm happy to have what I can get. 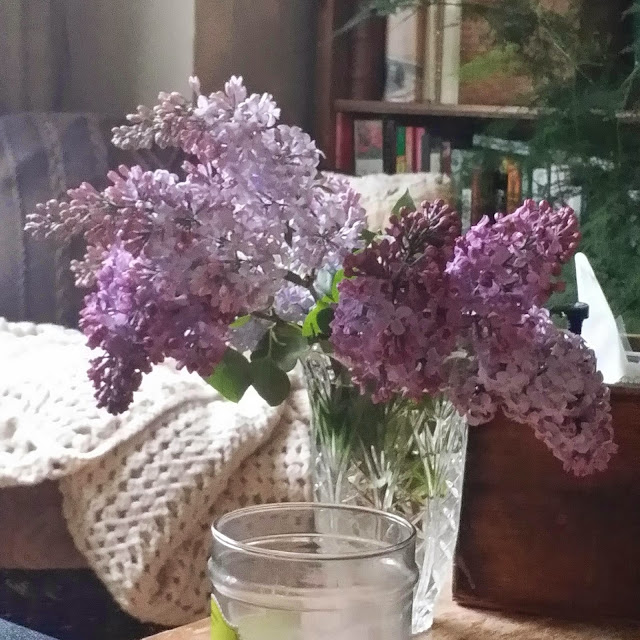 Another shot of 'gavota' tulip at sunset the other night. 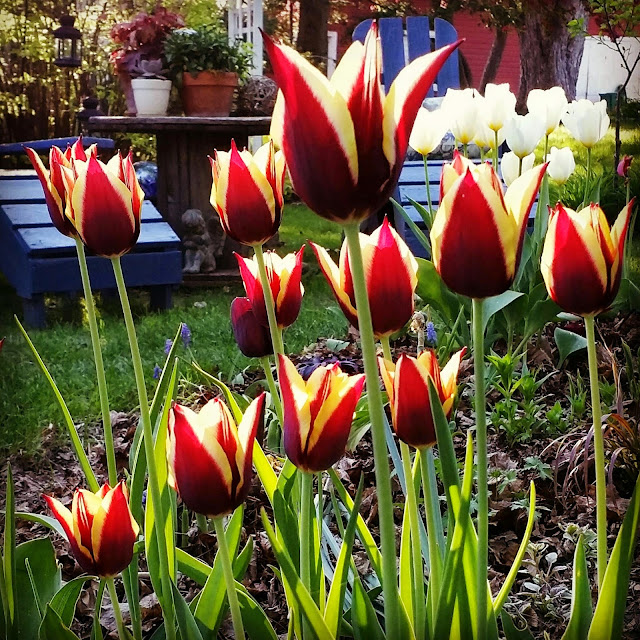 An unknown pale yellow that faded to white-  I'm really enjoying it. 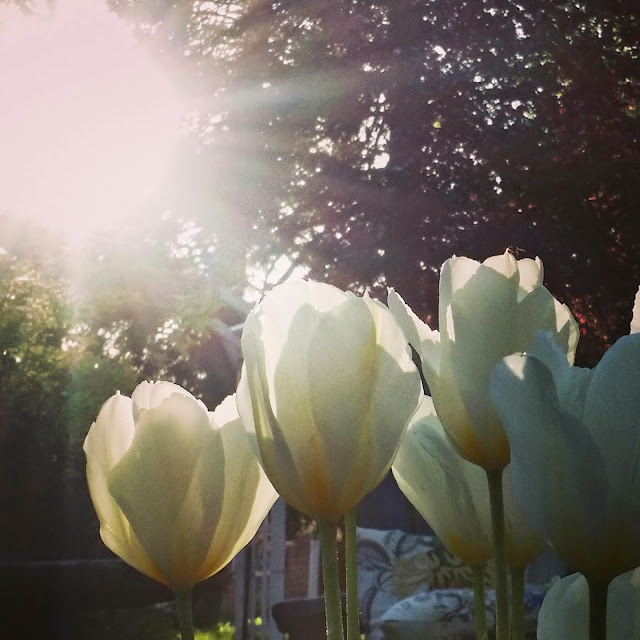 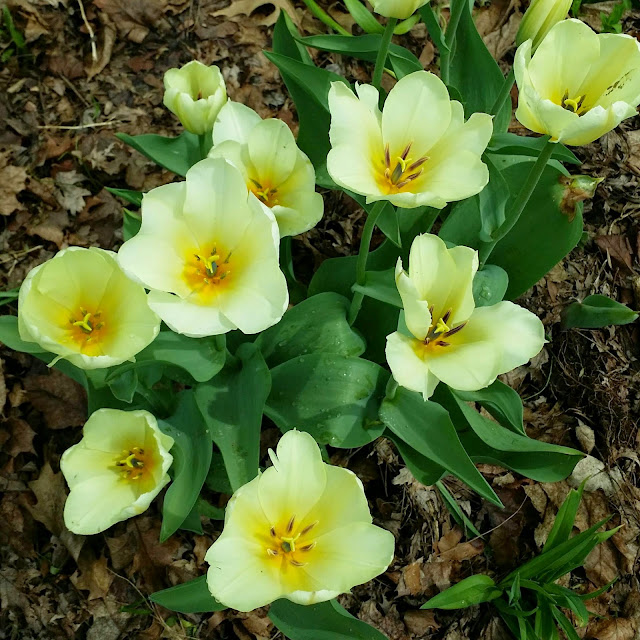 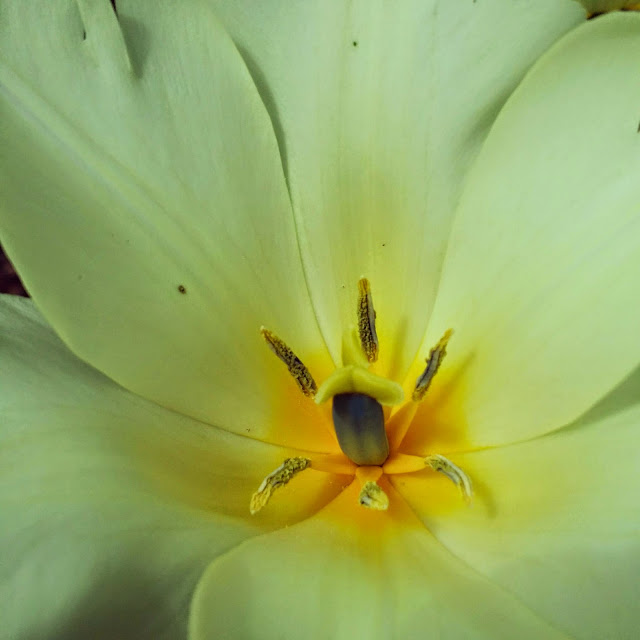 My "pink" trees in full bloom. I love crabapples. 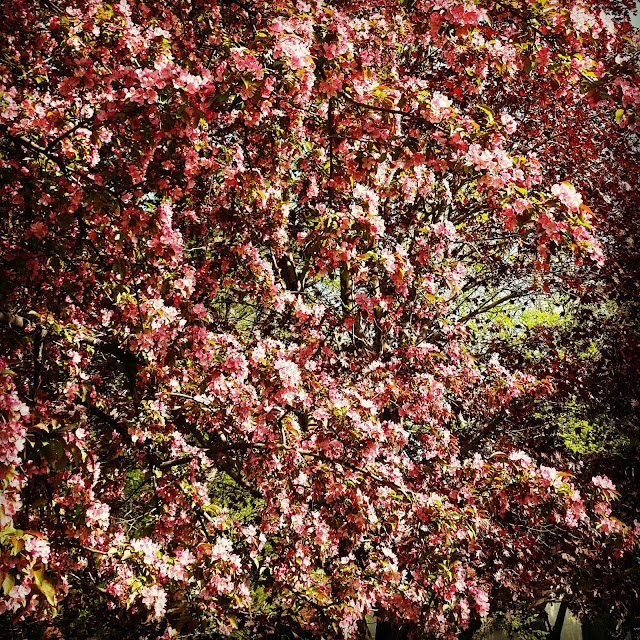 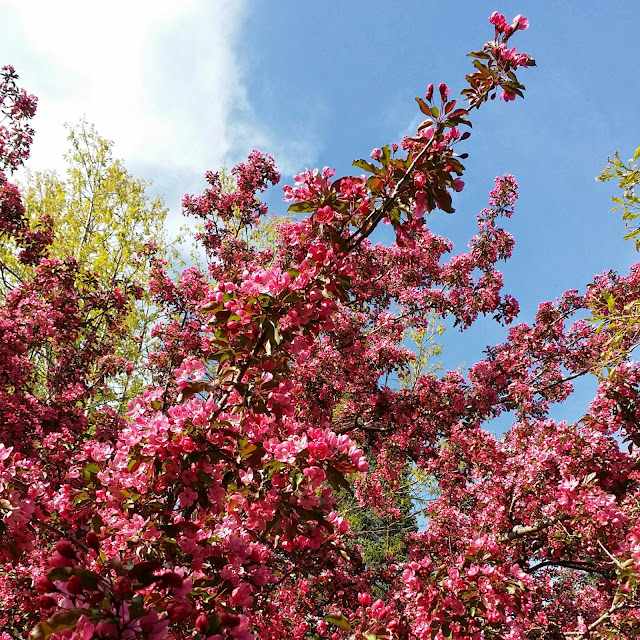 Two unknown tulips by the side door. 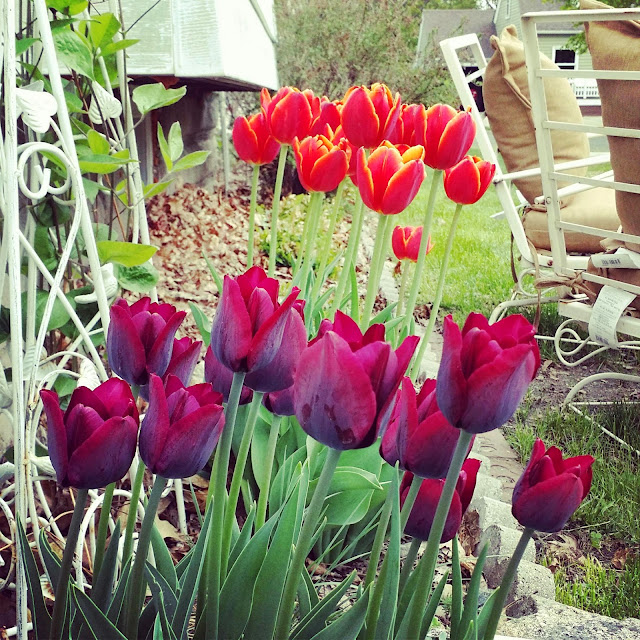 First shot of the front porch urns- some ostespurmum and 'molten lava' oxalis. 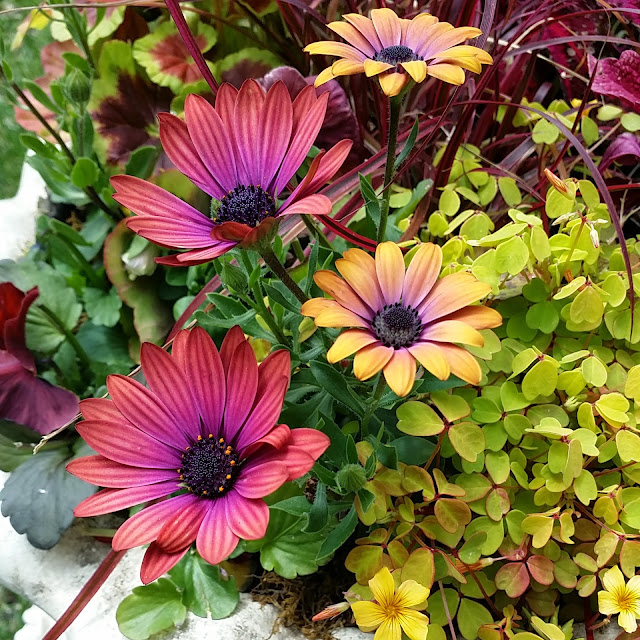 And check out the water droplets on this tulips. Yowza. 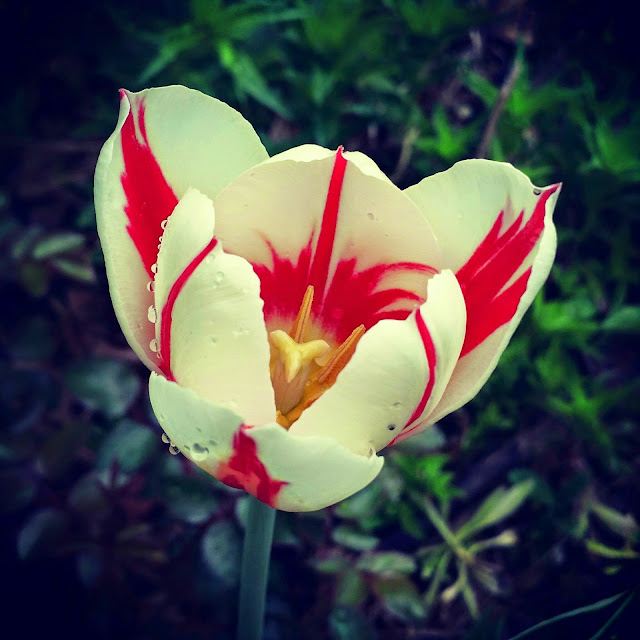 Hope you  enjoyed the pictures. Happy gardening!
Posted by Jamie Rex at 6:09 AM No comments:

Spring is certainly rocking here, so don't bother knocking... I'm in the garden and I won't hear ya. I've already been sunburned and dehydrated... I'm one of those gardeners that looses all sense of reality when I'm out there. Time is not a thing, unless I'm running out of daylight. I forget to use the potty, or go in for a glass of water. My husband actually gave me a camelback... but I won't wear it because it restricts my movement. Pretty ridiculous.
I've been so busy that these pictures are actually a couple weeks old now, but nevertheless share worthy. Here's the newest addition to the Rex Farm- we're now the proud care givers of 6 koi fish. A neighbor has had them for a while, but decided not keep them anymore. So far they love our pond. The fish are a bit skeptical of us when feeding- we have to stand back before they will come to the surface. They also much prefer to get the food as it falls down from the filter fountain to the bottom of the pond. 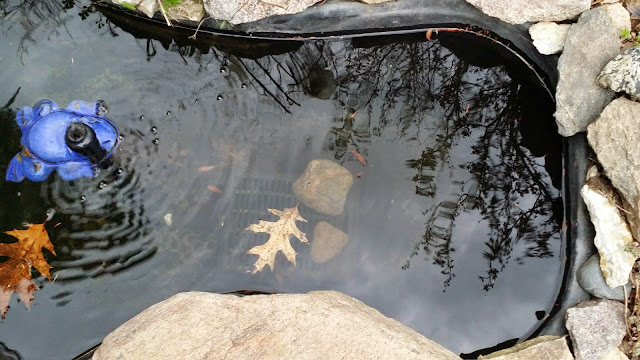 The greenhouse proved to be so worth its cost this year, as I started seeds vigorously, everything from lavender to zinnia, pumpkins, from sweet marjoram to castor bean. For the first time ever, I've grown every tomato, pepper, herb, pumpkin, squash, eggplant, etc from seed on my own. 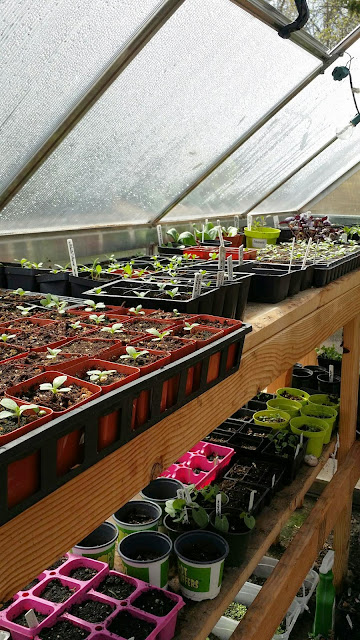 Why the lights? Besides it making the whole greenhouse look like a spaceship you can see from everywhere in town, it also helped get us through some seriously cold nights. I saw that adding Christmas lights (that actually get HOT to the touch) could up the temps by almost 10 degrees over night... it totally worked, as outside temps dipped down into the upper 20's and low 30's, and all of the stuff in the greenhouse sailed right through. I was careful to close up the window and the door (if they were open at all during the day) before 2pm or so, so the solar heat could build up over the afternoon... then the lights helped keep it up. I didn't do an exact scientific experiment, but I'm fairly certain it never dipped below 42 in there. 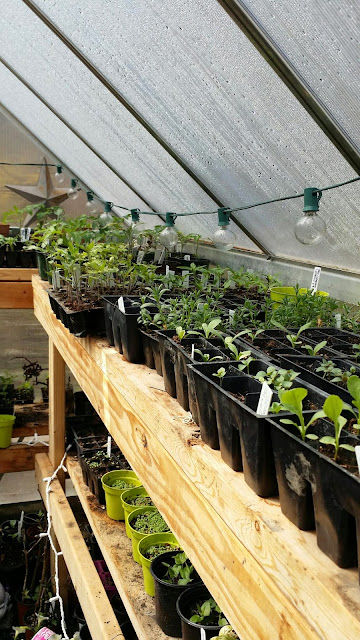 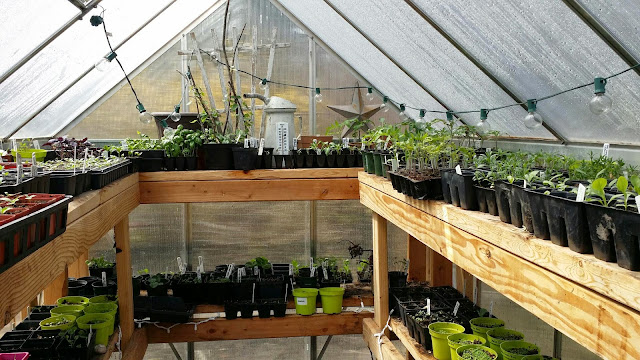 Outside the daffodils sang their song, and the bees loved it. 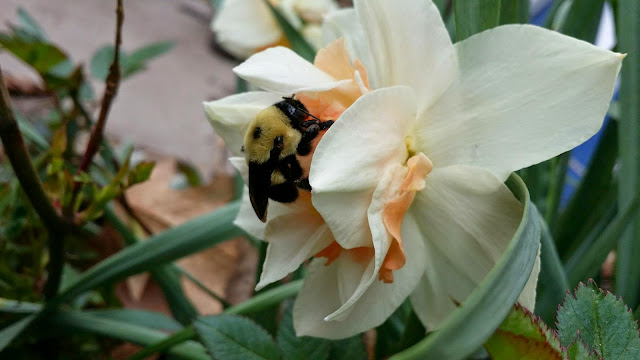 And I got super frugal and made this new shade cover for our gazebo! 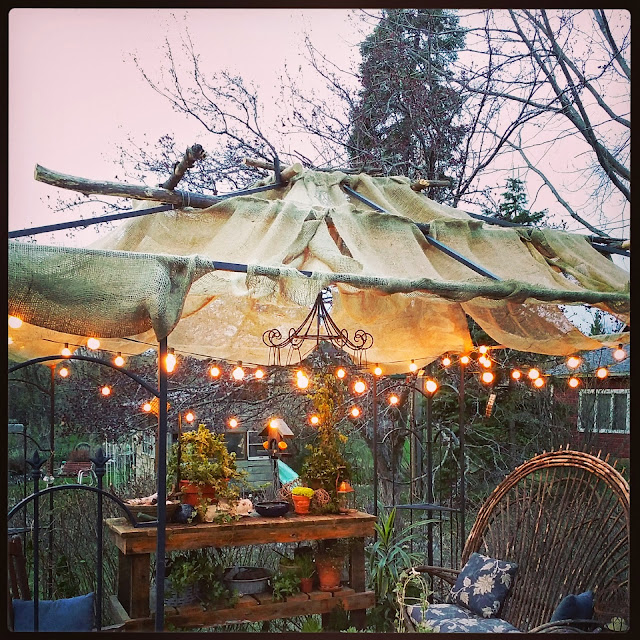 Our back porch is full HOT sun all day- and is relatively useless to us if its not covered. Years ago my mom bought us this nice gazebo with a screen cover- even had doors to keep the skeeters out- but last year it began to tear, and the mice chewed through the screen when it was stored in the garage. This spring has been financially taxing (to say the least); my husband is a retired veteran who was medically discharged from the Army this February, but has yet to see his VA benefits kick in. To say we're tight on money is an understatement! Can we say $6 in the bank? Yeah... so when I need to make shade for us I had to SUPER creative. I had bought some burlap for another project years ago, and never used it. Cheap garden burlap- like $6 a roll. I deciced if I had some cross bars (enter twigs from the forest behind our house) I could rig this thing with burlap. I literally used a household stapler and ta da! Its already managed several thunderstorms and even a wee bit of hail. My husband says it looks like Pirates of the Caribbean, which is FINE with me. I LOVE that ride (and movie). And you know what? Perfect shade! The plants I'm bringing out from their indoor slumber love it, and so do I.
Also, my husband built this table-- isn't it awesome?
We've also started finding frogs and toads in the yard. This silver tree frog was hanging out under the burlap, too. 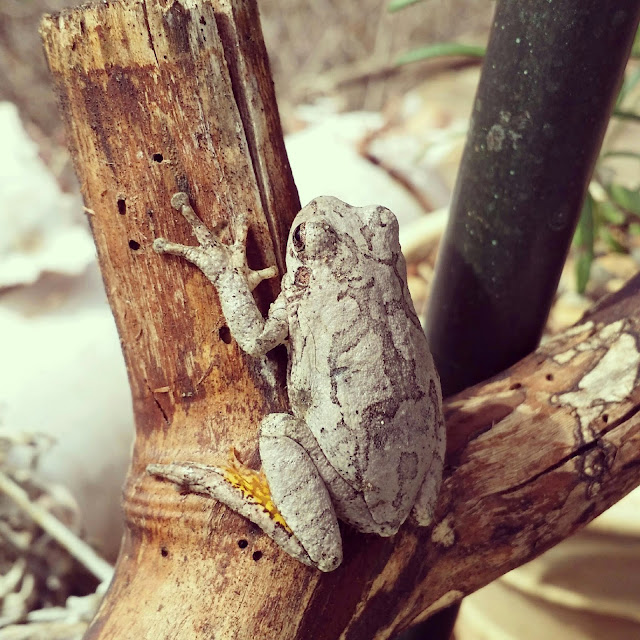 I overwintered TONS of succulents this year- many of which spent the whole season in my living room window. I brought a bunch of them out and stuffed them in his old metal "thing" my husband found at a yard sale for $2 last year. Its now the perfect window box on my shed (also made by my husband out of almost entirely salvaged materials last spring). 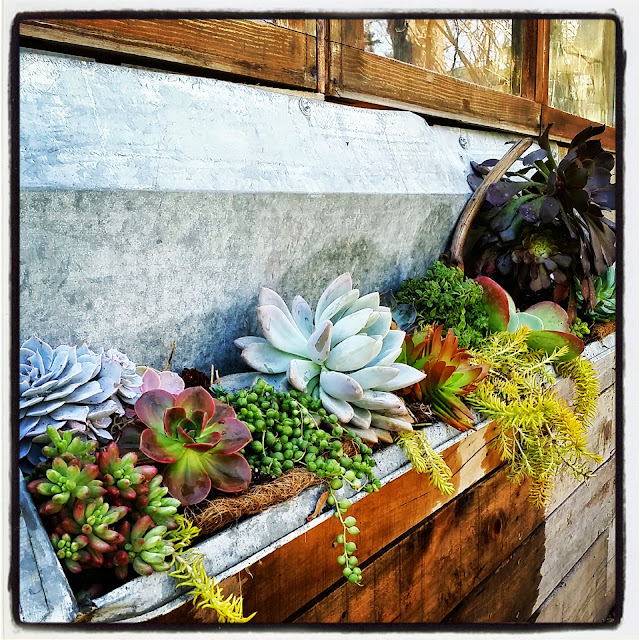 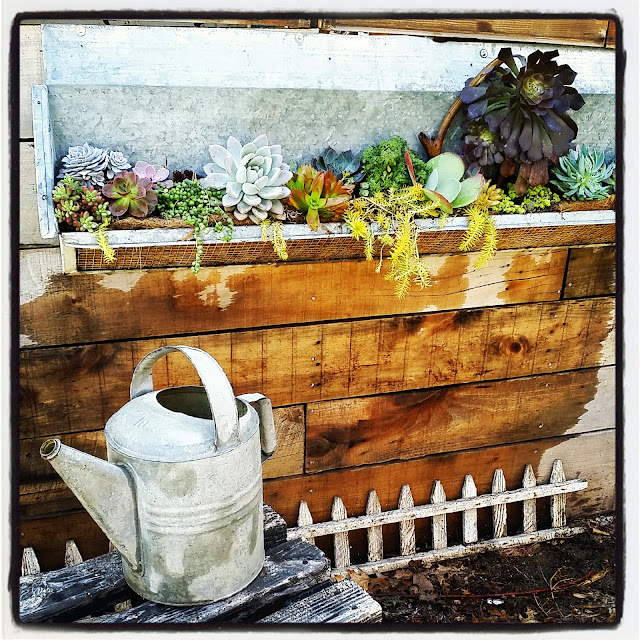 We've also had more bird activity than ever before. In fact, some doves laid eggs in our shed- in this huge willow heart I put up in the corner--- I was actually putting it there deliberately so birds would build in it, although I was hoping it would be inside the heart, not on top. Sadly, the birds only stayed a few days; every time I entered the shed, even if I did so slowly, tapping to announce my presence, the mama dove would fly up into the plastic-ey ceiling and bang her head, and spaz out for a bit before finding her way out. I was worried we would both hurt ourselves. I'm hoping she's found a better place to nest, as I still see her mister feeding at our feeders... 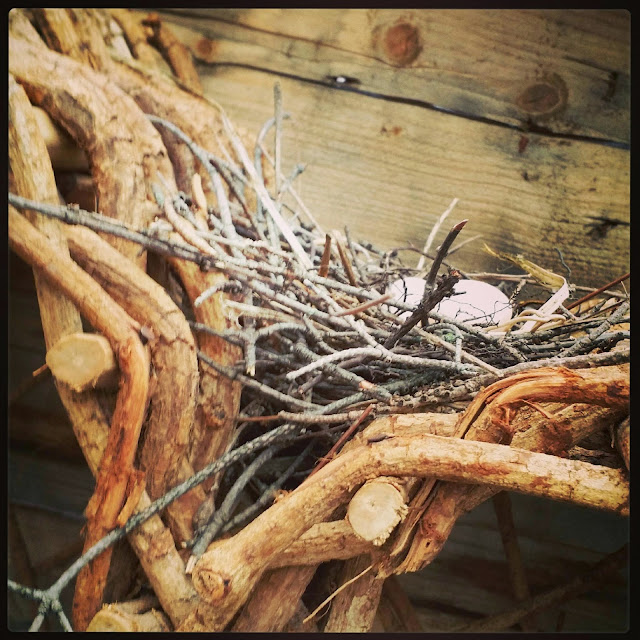 Hope the growing season is finding you all well! I was lucky enough to already get a trip to the local arboretum in, so look for pictures coming soon.
Happy gardening!
Posted by Jamie Rex at 8:52 AM No comments: