Since I began gardening on my own about 10 years ago I have read countless books and magazine articles that say foxgloves reseed. In 2004 when we bought our home I picked up some foxglove seeds and direct sowed them to find not a single germination. False hope came when fuzzy leaves of what turned out to be black eyed susan erupted everywhere... but nary a foxglove.
Year two, I bought a plant from Home Depot and watched it bloom only to vanish by the followsing spring. I got down on my hands and knees looking for seedlings for two years- nothing.
Year three, I thought, my naive logic, perhaps a better quality plant from the nursery would do the trick. I was partly right. I tried two, a small yellow foxglove, and a tall pink Camelot variety. The yellow ones has returned brilliantly for years like a true perennial, and never disappoints, but it's also never re-seeded.
I know it happens... I drove past a garden in Osh Kosh, Wisconsin that showed proof that foxgloves can naturalize- either that, or the owner had cottage style planting down to a science.
Before you start thinking I'm a dummy- I let the flowers go to seed. I leave the seed heads on the plants all through winter- I even grab one or two and sprinkle them into the surrounding dirt. Nada.
About my 4th year in this house I started planting perennial seeds during the growing season in used nursery pots on a sidewalk by the veggie bed. I tended to them throughout spring and summer, and planted them in late July to give them time to root well before the onslaught of winter. I decided to give foxgloves from seed another try that year, and I had a few germinations- and 3 or 4 healthy plants grow to be planted. I must have spent hours loooking at the fuzzy leaves hoping they weren't stray black-eyed susans. I knew they wouldn't flower the first year, but I planted them in the ground in 3-4 very different loactions, and waited.
Spring the following year- they were still there! Growth began early, and blooms came shortly after. I couldn't have been more tickled.
I spent hours laying on the grass watching the bees shove their fat butts up the bells of the foxgloves flowers. Needless to say, I quickly picked up another seed packet and started some more varieties on the sidewalk in the used nursery pots, and did the same thing. Last summer those bloomed, and surprisingly, the ones from the previous year did also, again.
This is what I had been waiting for: 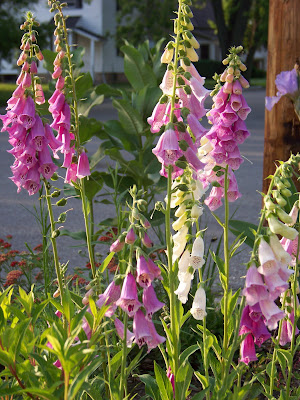 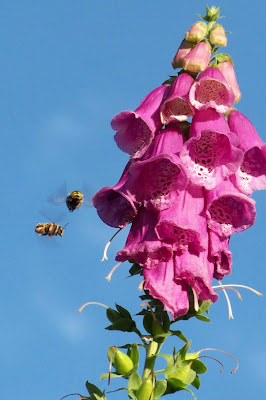 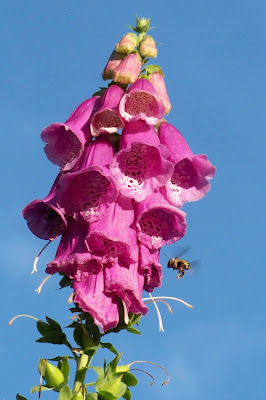 But not until this spring I have ever seen a foxglove reseed. I was out browsing the garden last night, making 2 dozen or so piles of leaves as I removed the winter cover and thatch from the lawns and beds. I knelt down in a particularly messy part of the back bad, where lysimachia, lamb's ear, black eyed susan (the kind with dark leathery leaves, not fuzzy), and iris are all meshing too closely, and found one returning foxglove- right where I left her... but she had a circle of babies. 6 or so. Tiny, all around her at varying distances. Not wanting overcrowding to get the best of the babies I snatched a few of them out of the dirt and potted them up. They will be adventuring to Minnesota with me later this spring.
Foxgloves really do reseed!
Posted by Jamie Rex at 5:00 AM

All the patience and trial pay off. They are very lovely. Our first attempt growing foxglove this year. Wish us luck.

YOU are so fortunate to have foxglove reseed. I'll never see it here (never? probably!) due to the fact that I don't really have very sunny gardens...

Foxglove are so beautiful, and I'd love to see more of them. I'd be satisfied if you'd post about them periodically. :-)

I agree. I haven't had a major infestation mind you, but I do have a small one out there that must have seeded from one of the big ones I got a the nursery last year. I'm going to do the same thing as you and seed some on the steps and see if I can add to them. Perseverance will work for me. I love these flowers.

Good luck to you all. I think the yellow ones do well in shady areas... might be worth looking into...
Years or patience has finally paid off here... and I hope to carry that over in my new garden in Minnesota.